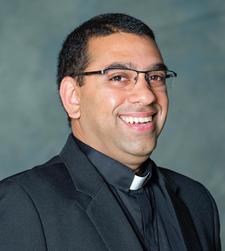 My name is Brenton Cordeiro. I was born in Goa, India, but spent the first few years of my childhood in Kuwait before my family returned to Goa amid the First Gulf War. I grew up in a typical Catholic family and community—there wasn’t anything particularly lacking in what I was taught about my faith, nor was there anything extraordinarily special about it either.

I first felt God call me to the priesthood on my sixteenth birthday. I initially brushed it off as a figment of my imagination, as at that time, I was quite rebellious about my faith, questioning everything about it. Plus, I was a sixteen-year-old then, more interested in dating girls and working towards my goal of a career as a reporter. It was easier to shelve the ‘call’ away at that time.

As the years went by, I became a part of Youth for Christ, and then later as a young adult, a part of Singles for Christ (both a part of Couples for Christ – a lay evangelistic community). It was there that my heart was set on fire for the Lord, and my life’s joy became serving the Lord in every way I could! It wasn’t always easy walking the straight line, and like any other guy my age, life had its ups and downs. But God had kindled a deep passion for Him in my life and I immersed myself in working and evangelizing for the Lord.

God’s call to the priesthood persisted through these years. And I just kept ignoring it and keeping it to myself, hoping that He would eventually stop. He did not.

In 2008, I moved to Bangalore, India, and eventually landed my dream job as a reporter at a world-renowned news agency. God blessed me abundantly there and I quickly moved up the ladder to become an editor in charge of a team of reporters. I continued to work with teenagers and young adults through the Couples for Christ ministry, serving at different programs in various parts of the country. Life was great!

In early 2012, (a bit fed up) with God continuing to repeat Himself to me, I finally decided to look a bit deeper into His repeated call to me. If nothing else, at least to evaluate if it was indeed a call to join the priesthood. The day I made that decision, God confirmed His call yet again through His Word:

“You did not choose me, but I chose you and appointed you so that you might go and bear fruit—fruit that will last—and so that whatever you ask in my name the Father will give you.” (John 15:16)

After a period of discernment, I came to the conclusion that I had to stop ignoring His call. A realization which meant that I had to change my plan for His plan. A plan that led me to discover the Companions of the Cross all the way in Canada!

It wasn’t an easy decision to let go of my comfortable ‘old life,’ my career or all the plans I had to become rich and famous and to travel the world. Nor was it easy to leave my family, everyone and everything I knew … or my homeland, where the temperature almost never drops below 15 degrees in the winter, to move to Combermere, Canada, where I have been told to expect minus 40 degrees in December!

Now at 27 years, after resisting the Lord’s repeated calls for over a decade, I have mustered the courage through His grace to take this step and join the seminary. I have not joined the seminary because some girl dumped me, or because my career was going nowhere or because my life was so messed up that I saw the priesthood as the only way I could sort things out – far from it!! I have joined the seminary because I believe God has called me to do so, and while my ‘old life’ was great, He is already showing me that He has even greater things in store for me.

I currenlty serve as the associate pastor at St. Timothy’s Parish in Toronto, ON.